Here’s something new: this surah is named with a verb! There’s one other surah ahead with such distinction, and it’s fascinating that there are these two exceptions to the conventional naming scheme of proper nouns (even last surah’s “Forgiver” was used as a proper noun.) I like the idea of something being titled for what it is doing; it communicates that the text is alive in a way. The verb in question is “fuṣṣilat,” which is a finnicky word to translate into English. Let’s parse this: the roots f-ṣ-l connote parting; the morphology of doubling the middle consonant into f-ṣṣ-l makes the verb causative and/or intensive, thus “made parted,” or “parted further”; the -at at the end signifies the past tense and indicates that the one doing is feminine/neutral, as all Arabic verbs build in pronouns to connect them to that which is doing. So in English we could translate this idea as “it parsed, subdivided, dissected,” and keep the etymological root of separation and parting, though unfortunately those verbs often are confined to some technical area like linguistics, math, or anatomy. “Distinguish” could be a great fit etymologically, except that it doubles to mean the elevation of something and that’s not meant here. The usual translations of this title is “explained in detail” but I’m going to take issue with that option. It looks like an adjectival phrase and not a verbal one. We need to include the pronoun to preserve the verbal nature of it. The verb “detail” is… okay for the purposes of translation. It comes to English through French and derives from the idea of cutting things into pieces, so not terribly different in base concept from “parting.” So “detail”…meh. Fine, it’ll do.

So what does Surah Fuṣṣilat detail?

END_OF_DOCUMENT_TOKEN_TO_BE_REPLACED

The times when the Quran most appeals to me are its moments of taking stock of the natural world. I am always in awe of nature, and so when the Quran likewise takes in the natural world with awe, I am drawn sympathetically to it. Today’s surah looks at the natural world and draws from it praises for God. As such, it is fitting that the opening ayah names God Faatir, “Originator,” and that this name is taken for the surah’s title. So please, take some time to read the brief 45 ayat of today’s surah, and then compare your impressions with mine below.

END_OF_DOCUMENT_TOKEN_TO_BE_REPLACED

With the significance of the rise of Islam and my focused examination on its inciting document, it’s easy to lose view of the fact that Muhammad’s ministry was for a long time just a tiny remote squabble on the fringes of civilization. Indeed, news of Muhammad’s activity hardly rippled into the broader world as far as we can see in surviving records. It wasn’t until Muhammad’s state erupted from the Arabian Penninsula after Muhammad’s death that chroniclers were forced to take notice. Though the rise of Islam would have the most significance in hindsight, the real battle of the fates as thought at the time was between the (Eastern) Romans and (Sasanid) Persians.

Though Mecca was a remote oasis location, it still was connected to the bigger world through trade and felt the ripples of those politics. In today’s surah, Ar-Rum, “The Romans,” we’re going to see fleeting peek of the world politics surrounding the Quran. Yet still, the Quran’s fight was with Mecca primarily, all the more so because today’s surah was still revealed in relation to Meccan conflicts. While the surah starts with this glimpse of larger politics, its substance promptly returns to Meccan fare.

END_OF_DOCUMENT_TOKEN_TO_BE_REPLACED 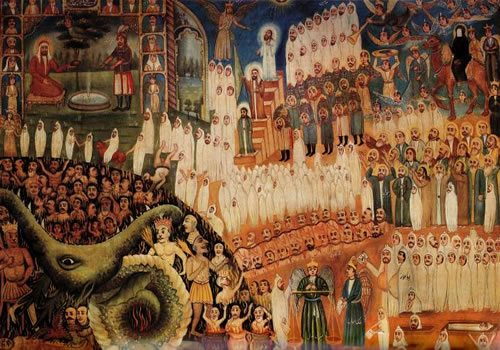 So about half of this surah’s material is about the prophets, and we looked at this last week. Now it’s time to zoom out, and what do we find?

This surah has a much bigger message than the existence of prophets. They are there for all the reasons I stated last week, but are really just part of a world that is descending into Judgement. Today we’re going to look at this material and how the Surah wants its audience to envision itself within this picture.